WHAT ARE QI GONG & FALUN GONG

This ancient Chinese practice is known as the art and science of using breathing techniques, gentle movements, and focused intentions to cultivate and circulate life energy through the body. By its very definition, qi gong is consciousness in motion and helps to guide the practitioner into a deeply mindful and relaxed state as the awareness goes within. An ideal activity for present moment fitness, qi gong also helps to reduce stress, increase vitality, strengthen the immune system, and benefit cardiovascular, respiratory, circulatory, lymphatic, and digestive functions. 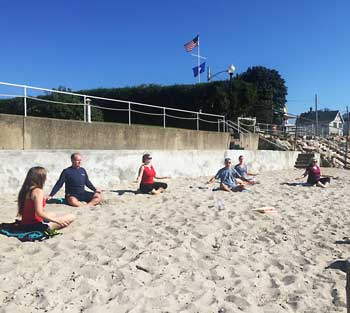 What is Falun Gong
After studying with Buddhist and Taoist masters from the age of eight, Li Hongzhi founded the Falun Dafa (falun Gong practice) movement and wrote the precepts.

Falun Gong as a Qi Gong practice
Falun Gong differed from most qigong groups in that it combined exercises with moral and spiritual teachings. Adherents aim to cultivate “truthfulness, compassion, and forbearance” and refine their “xining,” or moral character.

I have practiced Falun Gong since 1999 and found this heart centered practice to help me stay healthy. During this many years of practice I was never solicited by anyone, to buy attend meeting or give money to the organization. Further more this Qi Gong practice is always taught free of charge. From May to October I offer "Free Qi Gong on the Beach", with a teaching practice every other Sunday morning from 8am to 9:30am 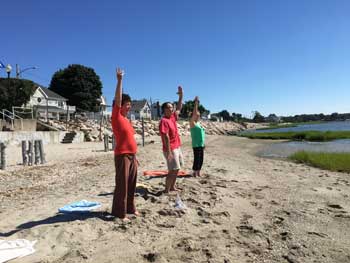 How to Learn Falun Gong?
Falun Gong is taught in most every major city around the world, and all of its teachings are available free of charge online in book, audio, and video format. You can download the audio files here.

Practice From May to October on Sunday morning

Find out more by joining our Meetup group: Conscious Living for Spiritual & Personal Growth to find out dates and locations in Connecticut or contact me for a group lesson.

Download this pdf of the movements for the standing and sitting practice which I created from the drawing in the falun dafa books. Printing this page and keeping it with me to practice o my walks in th ewoods or on thebach helped me learn the practice quicker.

This is a heart centered practice which I beleive helps you move from the third dimensional reality, that we have known until now, into the new fourth dimensional reality, in which the earth and our humanity is moving into. The fourth dimension is based on compassion and unconditional love for all life. It is the Christ consciousness or the buddha-hood that we have been striving to attain for thousands of years. 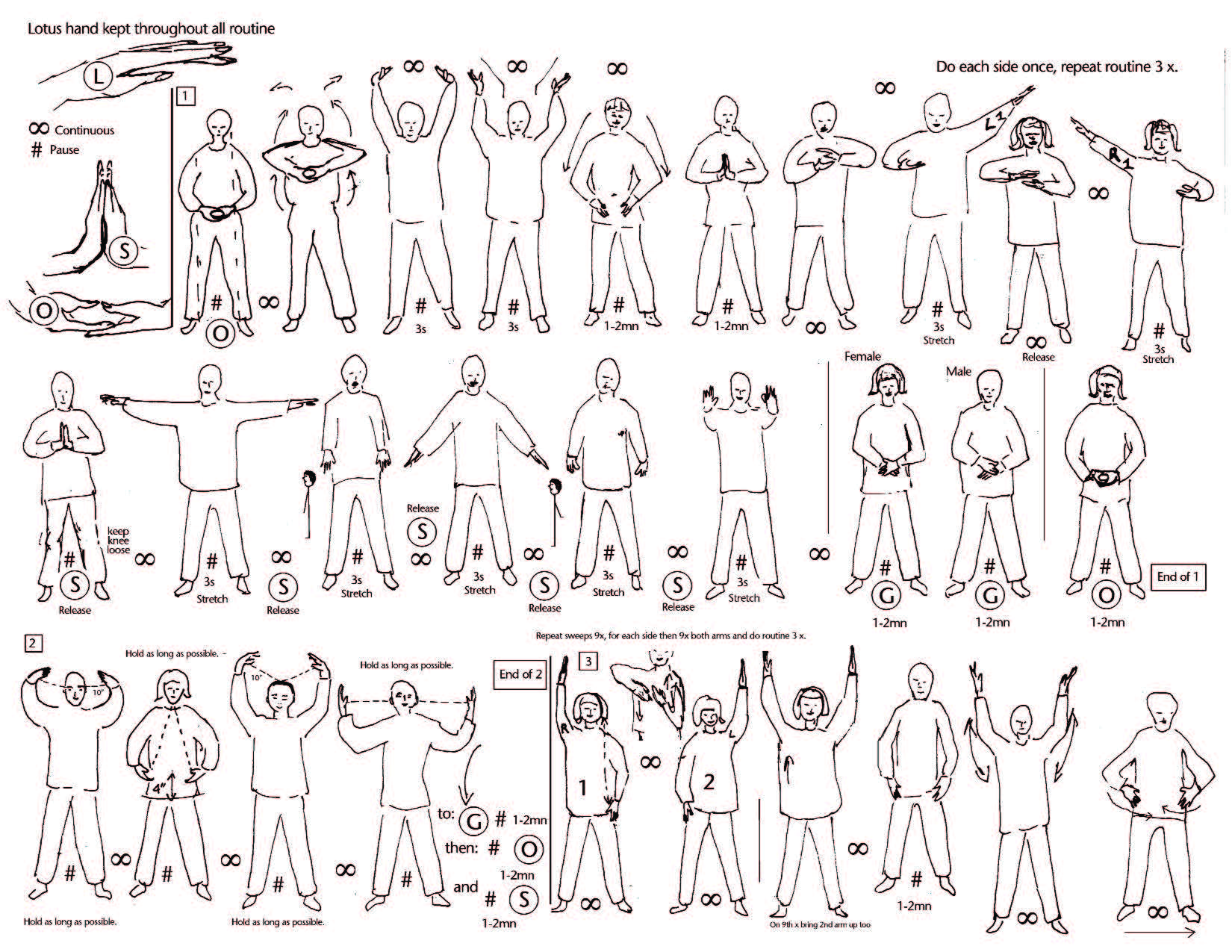 What about the exercises?
Falun Gong is purposefully different from qigong and t'ai chi. With qigong, all movement is precise. T'ai chi is deliberately slow and methodic to maximize the flow of qi, or chi, loosely defined as vital energy, the core concept of qigong. Falun Gong practitioners don't worry about precision. The stretching is not meant to be strenuous to cultivate qi; rather, it cultivates universal energy, spinning the falun in the clockwise position. 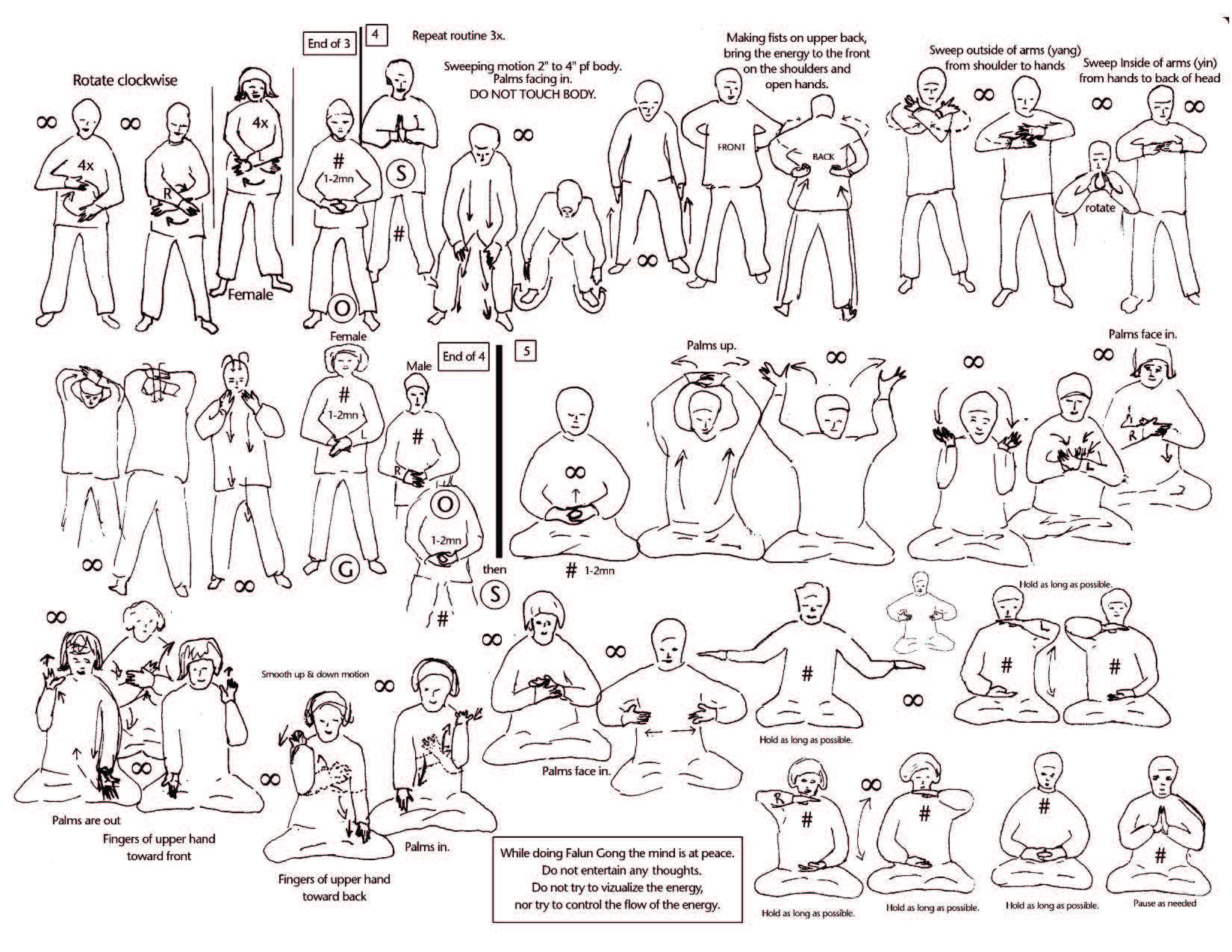 Falun Gong comprises four standing poses and one sitting, meditative pose. The sitting pose, called the "Way of Strengthening Supernormal Power," is similar to qigong meditation exercises that have been shown to lower blood pressure. The standing poses mainly stretch the upper body, similar to qigong poses that have been shown to improve circulation. The Falun Gong exercise "Penetrating the Two Cosmic Extremes," for example, can be quite invigorating. With this exercise, one's arms move slowly up and down like pistons.

The "Buddha Showing the Thousand Hands" exercise is most reminiscent of t'ai chi, with arms being stretched from side to side, like a hunter pulling back on a bow and arrow. The "Falun Standing Stance" exercise can build strength in the arms and shoulders, for the arms stay suspended for several minutes above the head in a U shape. Finally, the "Falun Heavenly Circulation" exercise involves running one's hands up and down the entire body a few inches from its surface.

An added element separating Falun Gong from qigong and t'ai chi is xinxing, a code of morality one must practice or else the exercises are said to have no benefit.

Xingxing can be translated as meaning the mind nature or the heart nature and also moral character.

A person who obtains advanced abilities through cultivation does not emit qi. Instead, he or she emits a cluster of high energy. It is a high-energy substance that manifests in the form of light, and its particles are fine and its density is high. This is gong. Only this can have a restraining effect on everyday people, and only with this can one treat sicknesses for others. There is a saying, “A Buddha’s light shines everywhere and rectifies all abnormalities.” It means that those who practice true cultivation carry immense energy in their bodies. Wherever these persons go, any abnormal condition within the area covered by their energy can be corrected and restored to normal. For instance, sickness in one’s body is truly an abnormal bodily state, and the sickness will disappear after this state is corrected. More simply put, gong is energy. Gong has physical characteristics, and practitioners can experience and perceive its objective existence through practicing cultivation.

Gong Potency is Developed Through Cultivating Xinxing.
The gong that truly determines the level of one’s gong potency (gongli) isn’t developed through performing qigong exercises. It is developed through the transformation of the substance called virtue (de), and through the cultivation of xinxing. This transformation process isn’t accomplished by “setting up a crucible and furnace to make an elixir from gathered chemicals,”18 as imagined by everyday people. The gong we refer to is generated outside the body, and it begins at the lower half of the body. Following the improvement of one’s xinxing, it grows upward in a spiral shape and forms completely outside one’s body. Upon reaching the crown of the head it then develops into a gong column. The height of this gong column determines the level of a person’s gong. The gong column exists in a deeply hidden dimension, making it difficult for an average person to see it.

Other forms of Gi Gong


Qi Revolution developped by Jeff Premac
The 4 day class is an intensive including Qi Gong and Tai Chi exercise borrowed form many traditions, breath work, nutritional information and recipes to support and improve physical health. The class is fast pace and reasonably price at $149 and is packed with great practices and demonstrations.

So packed that if you do not purchase at least the video to continue your practice it is virtually impossible to continue on your own. Same with the Nutritional package where you have the opportunity to purchase books, videos and even a vitamix on site! Of course after the level one, you can join a group in your area to practice.

Level 2 is also available to become a "certified teacher". It is a well rounded practice inclusing cardio owrk out and cleansing breath work.

In comparaison to the above practice their is less emphasis on spiritual development and mental harmony.

How the energy flows form one organ to the next in a 24 hours period.

Time indicates the onset of energy flow in that organ